Black History Month has revealed the faces and names of notable African-American’s and their contributions to American history. Black History Month also manages to omit the names of quite a few more African-American’s that deserve recognition, even if they are relegated to being “hometown heroes.” David Tobias Howard deserves recognition during the month of February and beyond.

Through research, I’ve discovered that David T. Howard was quite accomplished and well known throughout the city of Atlanta. As a successful undertaker, Howard was lauded as premier Negro undertaker or funeral services owner, enjoying over 50 years in service. 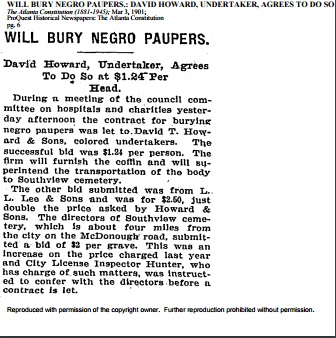 It appears that David T. Howard was a smart businessman when it came to capitalizing off of racial segregation within the city of Atlanta.   On March 3, 1901, The Atlanta Constitution posted an article stating David T. Howard’s decision to bury all Negro paupers who otherwise could not afford funeral services. Howard’s decision allowed the poor to be buried in dignity. It was quite interesting to also see a mention of the historic Southview cemetery as well. Howard outbid two other funeral homes to win the contract at $1.24 per body. Seems kinda morbid, but it obviously worked.

Just 19 years later, the Atlanta Constitution published another article lauding the success of Howard’s business. It reads as a “rags to riches” story and a bit autobiographical as well. Howard recalls how it felt to be a free man, and how he ultimately became the owner of the fourth largest funeral home in Atlanta. As per usual, the discussion quickly segways into the political and social commentary territory. Given the era, I’d have to give Howard a pass, but if his words were spoken in today’s era they would certainly be considered controversial. His opinions on race relations and equality are similar to Booker T. Washington’s ideas where he seems to place the responsibility of racial harmony upon the backs of African-American’s. Perhaps I am misunderstanding his comments, but these comments may have sparked criticism from W.E.B. DuBois at the time.